Skip to content
My Life, My Fitness Stress, Sleep, Food, Exercise: My Recent Relationship with All of Them

I have owned 1 or more horses for 26 years.  I started with 1, bought a weanling (who is now 17), lost my original horse, bought an OTTB mare, inherited one, bred my mare, and have her son, so I’m at 4 now.  In all those years 1 horse in particular, the 17yo, has run through a large variety of injuries. I have been lucky to have never had to deal with the stress of an illness.

And it was a doozy.

Well, not compared to some but for a noob to personal sick horses, it was huge.

I won’t go into all the details (but if you comment you want to know, I will!) but I’ll just say it started with a temperature of a whopping (are you sitting down?) 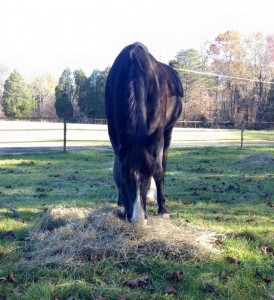 But I pulled up my big girl panties, and my vets and I set about with a plan.  This included the partial body clip you see here.  He’s never been body clipped a day in his life!

It’s now 2 weeks later and all appears to be behind us.  I’ll be holding my breath juuuuust a little for another week or so, then I’ll totally relax.

However, in all this, a lot of things happened, and it made my extremely aware of the relationship among the things listed in the title of this article:

Right off the bat I went into major stress mode.  I was caring for my horse hours a day, constantly checking his temperature, trying to keep intact bags/boots on his feet filled with ice to help prevent and even bigger emergency – laminitis.  I was giving anti-inflammatory drugs every 6, then every 8 hours for several days.  I was giving antibiotic shots. I  was making “alfalfa soup” to encourage as much water intake as I could.

All this meant I was not having enough time to sleep, and what sleep I was getting was not all that good.   Go figure.

All the stress also meant I had no appetite.  None. I forced myself to eat.  At least when you don’t feel like eating, it’s easier to pick healthy foods, because if you have to eat, it might as well be good for you right?   Right??!  But I didn’t eat nearly enough.

And, I wasn’t exercising.  My whole schedule was corrupted beyond belief.  I was still working – sort of, at least a few hours a day for a few days – but mostly I was icing feet and cleaning out a stall and feeding alfalfa soup and giving anti-inflammatories, and still having to care for my other 3 horses.  I had to keep them separated, so to feed them meant putting their buckets in the pasture and standing watch for as long as it takes the oldest and slowest eater to finish.  Standing there.  Thinking. Stressing…  Is the late 20-something guy going to get sick next? Is the 4yo going to be next?

After about 3 days of this I was feeling like total garbage.  Not enough food (but thankfully at least decent food). Not NEARLY enough sleep.  And NO exercise outside of the farm chores.

About Day 4 I forced myself to do a workout.  Yoga.  30 minutes.  I almost cried at the end when I immediately felt SO much better.  Really.  It set me up to start fixing my life, even while things were still stressful regarding my boy Rio.  Right away I got back to eating more, which helped me sleep better, which helped me have the mental willpower, not to mention physical ability, to get near-daily workouts in again.  And because of that, in addition to my horse starting to feel better, life started returning to some semblance of normal.

Now, it wasn’t a straight line climb back to normal.  Nope.  Things went in that squiggly, inpredictable line you’ve all seen.  He would get better, then he’d get worse and I’d stress all over.  Better, worse, though if you graphed it, the overall trend was better, so I hung onto that.

But I adapted to the new, if temporary normal, of a totally different routine, of having to monitor him many times a day, and I MADE the time again to eat relatively well (still not back to normal) and to exercise at least every other day, managing to get several consecutive workouts in a row.

As my stress level went down, even though my routine of medicating and feeding and monitoring still hadn’t changed, everything else started falling into place.  Or was it that I was eating and sleeping and exercising a little better, so my stress started getting under control?  Hmmm…

3,616 thoughts on “Stress, Sleep, Food, Exercise: My Recent Relationship with All of Them”